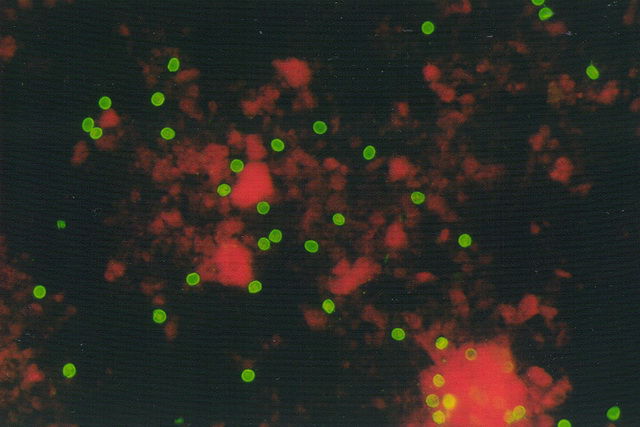 Cryptosporidium is a protozoan parasite associated with diarrhoeal illness in most parts of the world and is a frequent cause of traveller's diarrhoea. The disease is transmitted by ingestion of the oocyst, which is remarkably resistant to common disinfectants and routine chlorination of drinking water. The identification of cryptosporidium in faecal specimens obtained from clinical patients and water from environmental sources is made easier with the use of the Cellabs Crypto CEL range of products. The test is quick and convenient, providing the user with a microscopy result after 30 minutes of incubation.

The Cellabs Crypto Cel Reagent is the preferred antibody of the UK Drinking Water Inspectorate.

Testing for both Cryptosporidium and Giardia

In addition to products specific for Cryptosporidium or Giardia, Cellabs has a combined product, the Crypto/Giardia CEL, which detects both species. Identification of the Cryptosporidium and Giardia is made using fluorescence and morphological differences between the species. Giardia cysts can be clearly seen as larger parasites, approximately 7-10 microns in width and 10-15 microns in length compared to Cryptosporidium oocysts which are smaller around 4-6 microns in size. Not only does using the Cellabs Crypto/Giardia CEL provide the user with the convenience of detecting both organisms in one product, it is also economical giving the user a microscopy result after 30 minutes of incubation.

Cellabs produces a number of specialised products for Cryptosporidium and Giardia. We have recently developed a 15-minute Cryptosporidium stain specifically for use in water testing. This can be provided as a reagent with Evans Blue or without Evans Blue as a counterstain. Cellabs has also developed an equivalent product for Giardia and  Crypto/Giardia product range. The Giardia reagent can be purchased as a concentrated (10x concetrate) product for special water testing methods.