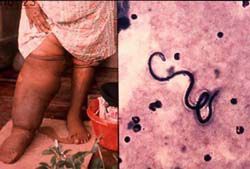 Lymphatic Filariasis (LF) is caused by microscopic worms transmitted to man by mosquitoes. Although easily curable with modern anti-helminthic drugs, the disease caused by LF (sometimes called elephantiasis) is crippling if left untreated. LF affects 120 million people worldwide in 80 countries, mostly in developing countries in Africa, South & South-East Asia and the Pacific region.  LF is the 4th leading cause of permanent disability (WHO 1998) and listed as one of the neglected tropical diseases targeted for elimination.


The Global Alliance to Eliminate Lymphatic Filariasis or GAELF was founded in 2000 to facilitate the control and eradication of LF. A programme of mass drug administration (MDA) is used to eliminate the parasite from infected populations and in combination with mosquito vector control, has proven highly effective.  However, actual disease eradication needs to be verified and measured, and current diagnostic tests such as microfilaremia or parasite antigen detection remain unsatisfactory.

Cellabs and its sister company TropBio have long been associated with the development and manufacture of diagnostic tests for LF. The Tropbio Og4C3 Filariasis Ag ELISA was the first commercial ELISA kit for the detection of Wuchereria bancrofti in serum and whole blood samples. The Tropbio filter paper disk was developed as an innovative method for the convenient and non-invasive collection of finger prick blood for testing.

In 2017, the Bm14 Filariasis Antibody CELISA was launched. It was the first commercial antibody ELISA for filariasis, manufactured under a Quality Management System (QMS), conforming to ISO13485. The kit was developed in collaboration with Dr Gary Weil, Washington University, St Louis, MI, USA as a serology test designed to detect antibodies in sentinel children within populations treated by MDA. In 2016, the kit was optimised for use with both serum and whole blood samples. The Bm14 Filariasis Antibody CELISA is available as a 2-plate kit or in bulk 10-plate kit formats for high volume testing.